Drafting Towers is a roguelite card game mixed with a tower defense.

You play as a pharaoh, your goal is to defend your pyramids against aliens. Those aliens constructed the pyramids, but that was a long time ago, now the pyramids are ours!

The game is very challenging, I advise you to start at a low difficulty before going for the real challenge in Hard mode. 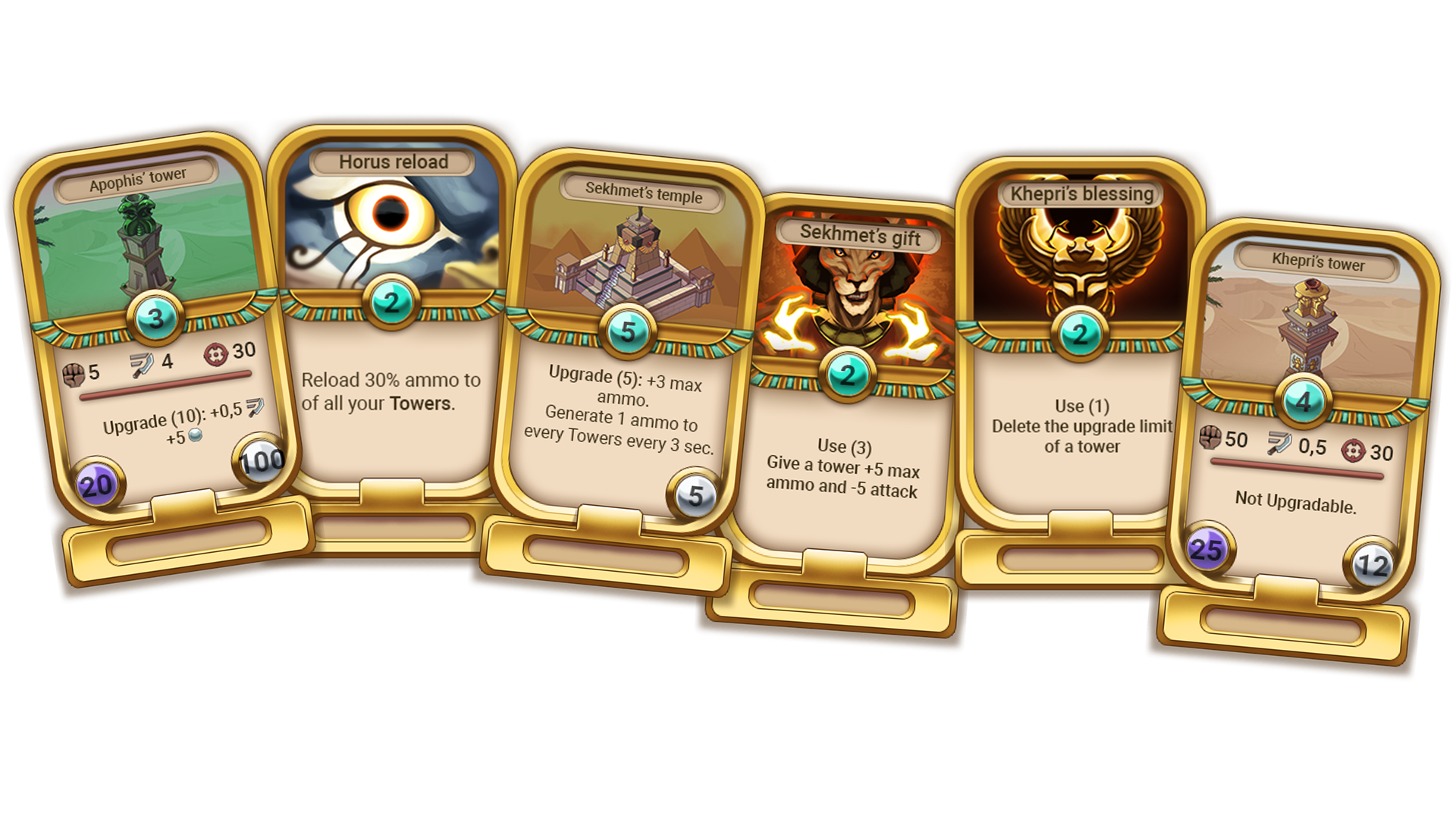 - 10 buildings to play around

- 3 difficulty modes to keep you entertained 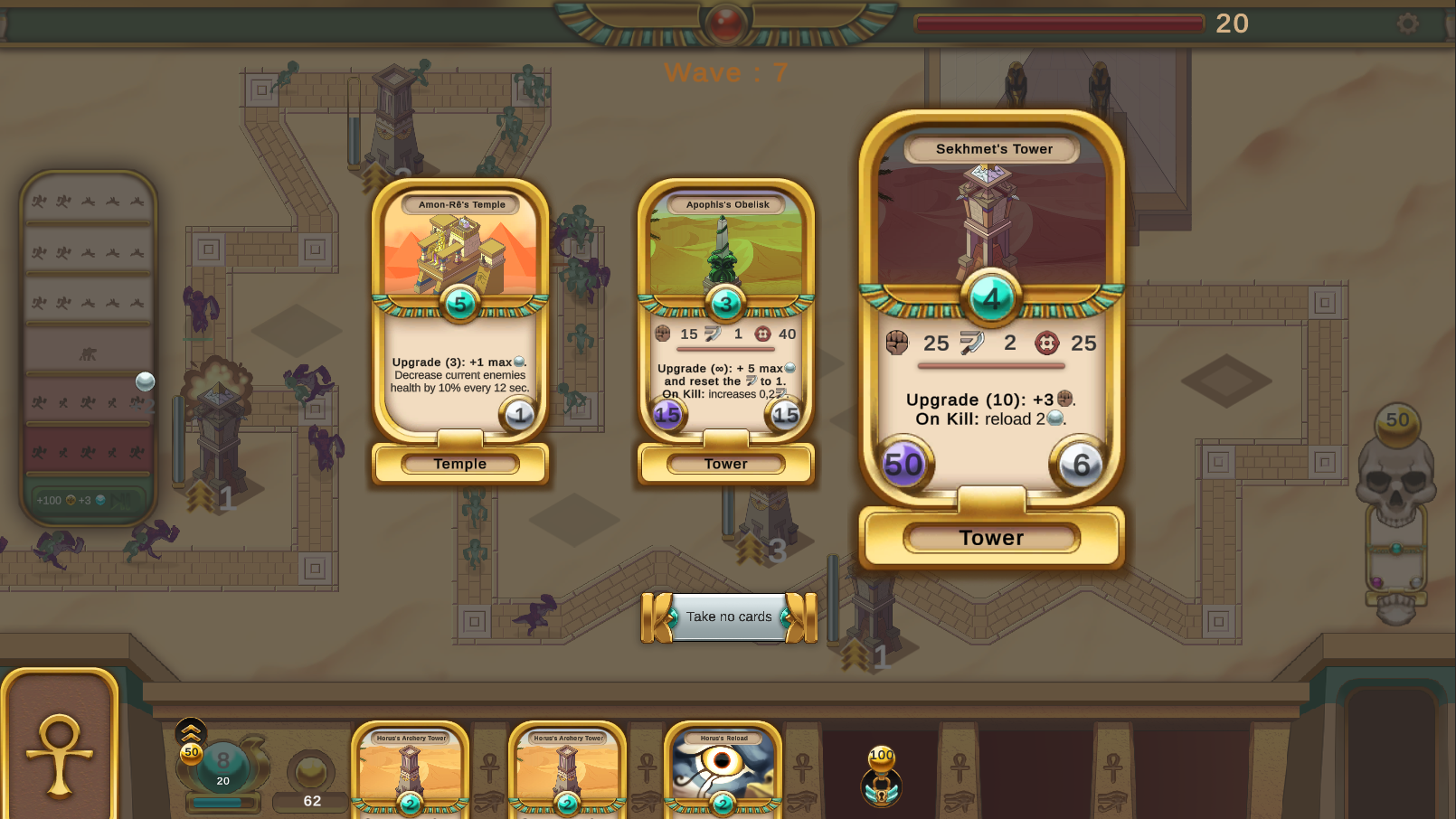 This game collects data about how you play. We are using this data to balance the game. You can access the data we collect at "Drafting Towers_Data/runs" in windows builds. By clicking "Run game" you accept to get your game data tracked.

Wishlist the game on Steam now!

The art and the theme are great, but there is a lot to improve in terms of game-play.

Firstly, the pace of the game is too fast. New players are not given the time to learn the game: Not only that all cards appear right from the beginning, as OddMess pointed out, but also that the constant influx of monsters deny any time to read the cards, devise plans, and play strategically. Even as I paused the game by opening the menu, the menu itself blocked the card zoom-ins.

Secondly, card balance is rather off, particularly:

I beat normal difficulty full health with Apophis's Archery Tower alone, plus a few +dmg spells from Tauoret, and Horus's Reload. I did not find any incentive to mix Towers.

But then again, nice ideas there. Keep up the good work!

Gameplay: Pacing is troublesome in many ways: I found tutorial unbearable and learned on the fly. I assume all cards can appear from the beginning - that a total informational overflow! (Also it kills the simple joy of progression, when you unlock best things in the end) The fact that all upgrades up to the max upLvl are unique, worsens it. Overall structure of just one huge lvl can be improved! Its a prototype, I know, but just simplest map would be a major improvement, as smaller missions give much more granular feedback on your strats. Feedback is a problem with tower defences in general...

Graphics: For a long time I found all the towers indistinguishable! (green one pops) Also I can't quite tell why, but enemies look cheap - maybe because they are 1px thin in code..

Overall, despite deck-building aspects, I think it plays just akin to classical tower defences, best of which are of course just unreachable at this point.. Innovate more please.

Thank you for your feedback!

The tutorial is awful, we will make a new one. Unlocking cards as you play is planned for the new version. We are aware of the information overload you can get when you play the game. In the next version we will get rid of the gold ressource, everything will be bought with water and it won't be possible to upgrade "water gain delay" anymore (so that's less to learn and to care about). Also the cards won't have all their informations shown at the same time, so you won't feel too overwhelmed. Our goal is to focus on deckbuilding and roguelike aspect so we won't have a map with hundred of levels. We have an objective of having 5 chapter per run with 20 waves each.

Awesome, I will keep an eye on your releases!

I will restrain my stream of thoughts, let me just say that just from purely practical side: sitting through 20 waves at your First acquaintance with the game seems to be a high barrier. Player will get a real feedback on their actions only by the end. Of course, you shouldn't explain your whole vision to me, you have reasons, I just think there's a problem to be addressed. Good luck! ;)

This is an awesome game. I love the mechanic of reloading towers + upgrading towers, and water and gold. There are a lot of interesting spells and temples too.

There's a bit of a glitch when your deck size is less than your hand size and you can hold an empty card.

I've beat hard mode massing a few of the tower types. I'd be really interested to see how other people can effectively use all 10 tower types (not all at once).

Thank you for your feedback!

this is a fun and good game on the tower defense idea, it has pleasent grahices and looks nice, this is a good game 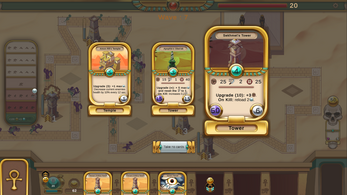